Home / News / What is Kilo Watt Peak? How to Compare Quotes for PV Installations. 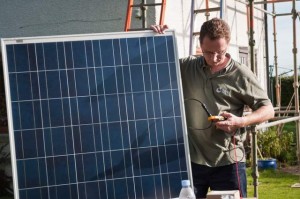 I recently went on a survey with one of my colleagues, we were the third or fourth company that had been asked to provide a quote for a solar PV installation.  It soon became apparent that they had a range of different quotes for different size systems and were unsure how to compare them and had been baffled by techno speak.

The best way to compare different quotes is to work out the price per Kilo Watt Peak (kWp) of a proposed system.  The kWp is the amount of electricity your system will produce in optimum (1000 lumen’s /m2) conditions and this has a direct correlation to how much you can earn in Feed in Tariffs.

You will generally get quotes with different size of panels and the kWp will differ.  To compare the quotes fairly you can then dived the quoted price by the kWp to get a price per kWp.   Recently we installed a 3.7 kWp system for approximately £14,500 which would give a price of £3918 per kWp, a competitor had quoted £17,000 for a 3.86 kWp a staggering £4404 per kWp.  It is always worth asking if you do have quotes varying in size and price to ask you preferred installer if they could install a larger system or price match.

When designing how the array will go on the roof we often do it so its more aesthetically pleasing and not necessarily the largest system possible, we are also concious of wind loading and putting the panels too close to the edge of the roof.

If you’re unsure just ask – EnergyMyWay will be more than happy to help demystify it for you.