We are proud to announce that EnergyMyWay Oxford were honoured as 2012 finalists at the prestigious Oxfordshire Business Awards on Friday 15th June. The Oxfordshire Business Awards are now in their 17th year, with a record 260 businesses entering for the 2012 awards. Over 500 people attended the Awards ceremony and Awards Chairman Paul Lowe said, ?This has been the most competitive year I can remember and the longest judging meeting in the competition?s history. But the result is entries of fantastic quality.?

EnergyMyWay directors, Jason Hobbins, James Eades and Amanda Hobbins were presented with the award in recognition of the company?s contribution to reducing carbon emissions in the UK. 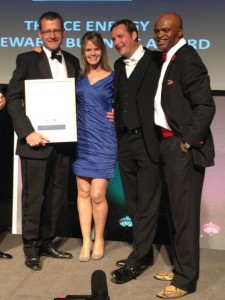 Founder of EnergyMyWay, and Managing Director of the Oxford office, Jason Hobbins is a leading expert in the complete range of renewable energy technologies.