On a recent solar pv survey we were asked to look at an existing solar thermal installation which had been installed for over a year but the home owner was concerned the system wasn’t working properly.

The solar thermal system had been installed by their builder whilst having some renovation work carried out.  What we found is unfortunately more common than you would think.

Whilst the pipe work may have looked neat and tidy it was a shoddy installation which contributed little to heating the hot water, the errors we found were: 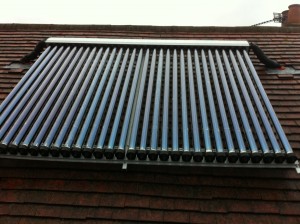 All of the above make the system highly ineffective and will give little contribution to heating the hot water.  It will cost approximately £500 -.£600 to rectify and goes to show when choosing an installer make sure they understand the technology and how it works and use the correct parts.  We are coming across these issues more frequently and offer system checks and servicing on solar thermal installations.