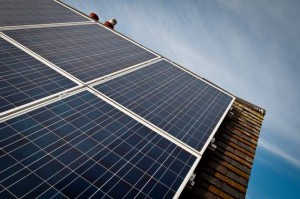 Installations of solar pv panels to generate electricity are going through the roof this year going from 6 MW mega watts being installed in 2009 to 96 MW in 2010 and forecast to increase by a staggering 50% in subsequent years according to market intelligence group iSuppli and growth is set to continue to grow given the recent endorsement of the Feed in Tariffs in the spending review.

Consumers are encouraged to install solar panels as the UK and Spain become the fastest-growing markets for photovoltaic technology in 2010.

The United Kingdom will become the fastest-growing market for photovoltaic (PV) installations in 2010, according to a July 30 report from market intelligence group iSuppli. iSuppli estimates that the UK will install PV systems amounting to 96 megawatts (MW) throughout 2010, representing an increase of 1,500 percent from 2009 where the total installation of PV systems was 6 MW.

The next fastest-growing nation in terms of installation of PV systems is predicted to be Spain, where PV systems will increase 730 percent by the end of 2010.

The leading countries in terms of currently installed PV systems are Germany, which is expected to install a further 6.6 gigawatts (GW) of PV systems in 2010, Italy – due to install 1.3GW in 2010, the United States installing 1.1GW, while France and Japan are fourth and fifth in terms of currently installed PV systems with both countries set to cross the 1GW threshold for the first time. However it is thought that a growing production of PV cells in China and a weakened euro against the Chinese yuan will lead to a slowdown in the global PV market by 2012.

In order to reduce CO2 emissions and to meet 2020 European targets for renewable energy, countries across Europe are encouraging the distribution of smaller, self-generating solar panels for use in individual households.