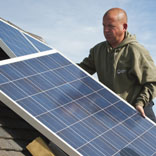 The average combined savings and income from households with solar PV in the UK has increased by nearly £100 since last May according to new data published by the Energy Saving Trust (EST).

Previously, the EST found that that the average combined savings and income for households installing solar PV panels was around £540. However, the trust?s latest investigation into the saving and income potential of solar PV has found that the figure has now risen to £635, despite the feed-in tariff rate dipping to 15.44p/kWh.

The EST believes that the main reason behind the dramatic increase in total benefit is that the average size of solar installations in the UK is increasing. Commenting on the findings, Ian Cuthbert, EST?s renewables expert, said:  ?The average size of solar PV installations has increased from 3kWp to 3.5kWP, which basically means households are generating more electricity and therefore more savings and feed-in tariff income. It is clear that UK households are increasingly looking to get the maximum yield for their roof to maximise the benefits of the solar installation.

The reasons behind the rise in average installed system size are not entirley clear, Cuthbert noted: ?We cannot be 100% on the reasons for this but we believe its down to two factors: desire for higher yields and reduction in capital cost which allows them to buy bigger systems. It may be the case that there?s a cash value limit/upper tolerance for most people installing e.g. £8k. Two years ago that would probably get you a system less than 2kWp in size. Now that would pretty much get you the full 4kWp.

The EST also surveyed 2,000 households from across the country to help identify wider industry trends. A third of those contacted had been approached about the possibility of installing solar panels yet only 4% elected to purchase a system. This suggests the industry must work harder at convincing potential customers that installing solar is a worthwhile investment, both financially and emotionally.

Speaking to Solar Power Portal, Cuthbert said that he didn?t believe consumers were aware of the returns on offer for solar despite the lower feed-in tariff rates, he explained: ?There?s two important points to emphasise with this. The first is that consumers may not realise that whilst the FIT rates have come down, so has the capital cost.  If your metric of return is payback then the payback today is similar to what it was when FiT began. From around £12k generating £1k per annum to £7.6k generating £635.  Both give you just under 12 years.  We don?t think consumers realise this.

?Furthermore, whilst we?ve announced these figures we believe the returns could be higher depending on individual circumstances. We know some 4kWp systems can cost as little as £5k. If you factor this in with consumers changing behaviour to get the most out of their system (by changing their demand to when PV is generating) then the onsite savings will be higher. The second point relates to consumer understanding of figures relating to returns. We have serious concerns about the way in which some companies present these figures to customers as they may employ different assumptions and different methodologies. This is something we?re engaging with industry and government on as part of a broader theme on consistency of information and data.?

Cuthbert added: ?We hope the latest data and figures will provide householders, whose homes are appropriate for solar panels, with the reassurance that they will be making significant savings and income as a result of the installation. These savings could be even higher if householders take steps to reduce the amount they export to the grid by shifting some of their electrical demand to during the day when the solar PV system is generating.

?It is also important for installers to be offering the right measure in the right home alongside the right advice to ensure that trust continues to be built between them and householders who could benefit from solar installations.?