Ken was very happy share the performance data of his Wind Turbine, however the turbine was not working which may have been a result of a recent lightning strike to the nearby overhead power cables.

A site visit was carried out by EnergyMyWay and it was diagnosed that the turbine was still functioning correctly and able to generate electricity, but there had been a DC overvoltage in both inverters causing the main capacitors to blow, there was also a burnt out PCB in the rectifier unit. 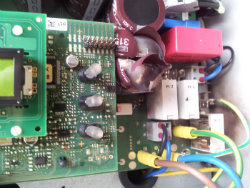 After diagnosing the invert had been damaged a proposal was submitted to replace the inverters and to carry out a service of the turbine to ensure that it was working perfectly.

All of the new components were delivered within a week of ordering and the repair was completed in half a day. When we released the brake on the turbine and the replacement inverters powered up straight away.

Ken is delighted to have his turbine up and running again and we will shortly be lowering it to carry out a service on the turbine itself.   We will be holding an open day at the farm, inviting guests from the local community and business?s to come and find out more about Wind Turbines. The date is to be confirmed but we hope this will take place early in 2013. 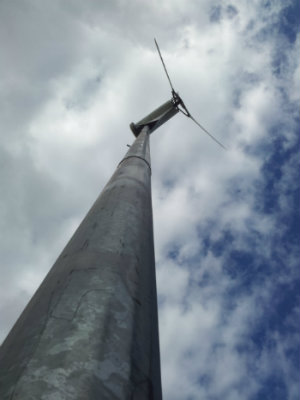 If you have a Proven turbine and would like us to carry out a health check or you are interested in us conducting a survey for a new installation, please call David Wallman on 01223 929388 or email dw@energymyway.co.uk