Home / News / Maximise your Solar PV with an Immersun

Lincolnshire property innovates to maximise the use of its Solar PV 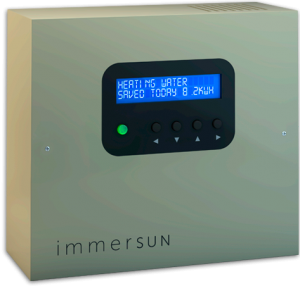 Property owners in Bracebridge Heath in Lincoln have recently taken advantage of a new innovative product to maximise the use of their Solar PV installation.

Karl and Michelle invested in a 4kWp Solar PV array in November 2011 with top quality panels from Panasonic and an SMA inverter.  They were delighted with the installation and 6 months into their generation had generated more than 12% more electricity than had been predicted by EnergyMyWay (and that was over a winter period!).

They have just decided to ask EnergyMyWay back to install the new Immersun product.  They said that they could hardly believe that within just a few hours of the installation being completed they had a full tank of hot water that cost them nothing!  They also had a destratification pump fitted at the same time as they immersion heater was in the top of their hot water cylinder.

Karl and Michelle are impressed with the concept and are looking forward to the returns they will benefit from and are now considering EnergyMyWay’s next innovation, a Voltage Optimisation device.