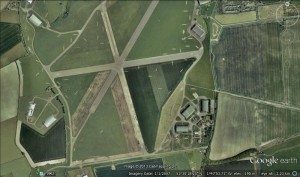 EnergyMyWay is proud to announce that the largest solar farm in the UK achieved planning consent on Tuesday evening, with overwhelming public support.  Our specialist large-scale team, Energy Assets, initiated and designed the proposed development, to be sited at the Science Museum?s Wroughton Airfield site.  The scheme will be 40MW, 8MW larger than the Wymeswold Airfield site in Leicestershire, currently the largest site to have been constructed and commissioned.

Swindon Borough Council?s planning team recommended the project for approval. The Borough?s Committee then went on to approve the proposals.  As a matter of course, the case will now be referred to the National Planning Casework Unit, where Eric Pickles, Communities? Secretary, has 21 days to review the application.

Having then secured an exclusivity agreement for Swindon Commercial Services (SCS), the UK?s only public sector-owned solar farm developer, Energy Assets turned their attention to securing grid connection permission and completing the detailed system designs required for the planning submission.

Energy Assets? initial assumption was that the system would connect into the Wroughton primary sub station.  However, following meetings with SSE?s System Planning Engineer for the 33kV network, the option to connect into the Toothill primary sub station was floated ? a move that would increase the potential system size from 15MW to upwards of 40MW.

Hugh Taylor, Director at Energy Assets, commented ?The benefit of our close and strong relations with DNOs was highlighted by this one, game-changing conversation?.

The design team at Energy Assets then went on to create and submit the successful G59 application for connection for the larger system size.

Energy Assets, took the unusual decision of making a capital investment into the development phase of the project.  This move was taken in spite of the scheme?s overriding challenge ? that it was not only the largest solar farm to be proposed in the UK, but that it was to be located within the boundary of the North Wessex Area of Outstanding Natural Beauty (AONB).

?The sensitivity and intelligence of the approach taken by James Owen of SCS ? and similarly by Colin Virtue of Pegasus Group and by Matt Moore of the Science Museum ? gave us great confidence that the project would have the best chance of success? said EnergyMyWay Managing Director, Jason Hobbins.

?The genuine consideration that was given to the hopes and fears of the local community, to the ecological impact of the proposal and to continuity of farming was uncompromising from the outset?

The outcome of this approach was unprecedented local support from the Wroughton community.  On the day of the planning determination, the Swindon Advertiser reported that 96% of local people surveyed were in favour of the project.

Hugh Taylor, Managing Director of Energy Assets, who was on hand at the planning consultation meeting in Wroughton in January 2013, was impressed by the overwhelming support even at that early stage:  ?There was, and remains to this day, a strong sense of pride, within the community, in having such a significant and positive development on their doorstep.?

Have a Solar Farm Site with Potential?

If you are a landowner and you would like expert help in realising the large scale renewable energy potential on your farm, the Energy Assets team can help you.  Please contact Hugh Taylor in confidence by email hugh.taylor@energymyway.co.uk or on 01865 733230 or 07979 647294.

Hugh is an expert on utility-scale renewables development, particularly solar farms. He is always happy to speak to farmers, landowners and their agents in confidence about potential renewables opportunities.