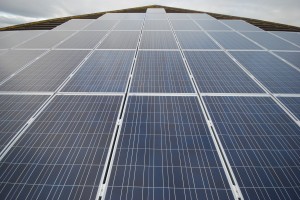 The government is set to severely restrict the subsidies it will pay to new solar power plants. The policy U-turn, that will be laid out in detail by ministers later this week will limit the size of solar panel installations that will benefit from the maximum subsidy so cutting funding to larger scale “solar farms”.

The likely result is that only small domestic installations, of less than 50kW capacity ? enough to cover 15 average house roofs (approx 200 PV panels) but not a large barn roof ? will be eligible for the feed-in tariffs at current rates. These have fuelled the first widespread take-up of solar power in the UK, and created hundreds of new jobs.

The news was greeted with dismay by businesses and investors. “I am aggrieved, definitely aggrieved,” says Rod Pearson, managing director of Crealy Adventure Parks. “We were trying to be carbon-neutral, and we wanted to use solar panels to do that. It was an excellent plan, full of common sense, and I could see no bad in it.”

His plans ? to cover the roof of his two amusements parks in Devon and Cornwall with solar panels that would provide 90% of his energy needs ? are now in jeopardy.

Under the revised proposals, anything bigger than 50kW? from a farmer’s barn roof to a school building or a supermarket’s covered car park ? will receive much smaller subsidies, allowing a rate of return of about 5% rather than the 12% envisaged for smaller projects. The lower rate would not be enough to attract the bank loans and investment needed, solar experts fear, especially as investors and banks have been spooked by the government’s willingness to drastically reform the system so soon after implementing it.