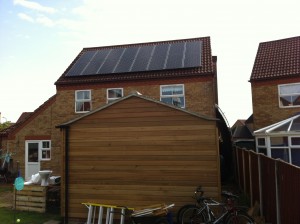 Mr Fidoe of Bracebridge Heath Lincoln,  was already enjoying the benefits of his 4kW Solar PV system when EnergyMyWay, renewable energy installers based in Lincoln, recommended he could get even more benefit from retrofitting an ImmerSUN. Now any solar electricity that isn’t used in the home, is redirected to the immersion heater, providing hot water to meet the families demands.

The ImmerSUN was installed in September 2012 as a retrofit to his 4kWp Solar PV installation of Panasonic Panels and SMA Inverter.  The ImmerSUN has been connected to a 250 litre hot water cylinder with a 3kW immersion heater positioned at the base of the cylinder.

On recent sunny days, the PV system has been producing around 25kWh of electricity of which sometimes up to 18kWh is being fed into the hot water cylinder. Since the installation of the immerSUN, it has used around 300kWh of solar electricity to create hot water and that has mainly been over the winter period and even then during what has been a fairly soggy spring so far. 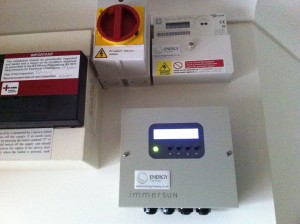 Mr Fidoe comments that ‘the system is ideal for our family as very often there is little electricity usage in the day but as we get home from work and the kids from school there is a reasonably large demand for hot water.  It is a great practical and financial compliment to what has proved to be a fantastic Solar PV investment’.

For further details please contact Richard Jones, EnergyMyWay on 01522 370268 or at lincs@energymyway.co.uk.