The new coalition government are considering increasing stamp duty by 0.5% on inefficient homes says a recent article in the Guardian. A new green tax being considered by the government could add £850 to the cost of buying a typical home ? and it would require the new owner to spend at least £15,000 on improvements before they would trigger a rebate. This combined with pay as you save loans could really stimulate the retro fit market place. 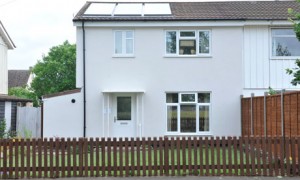 The plan, being considered by the Coalition but commissioned by the last Labour government, would make buyers pay an additional 0.5% stamp duty if the home they purchased had a poor energy rating. If they sharply improved the rating within a year ? by fitting insulation and perhaps solar panels ? they could reclaim up to twice the amount of the green tax from a so-called Green Investment Bank.

The property industry has branded the idea as unworkable and a stealth tax, which risks throwing the housing market into turmoil.

There is already a mandatory energy assessment undertaken by inspectors on all homes before they go on sale. Ratings range from A down to G and each gives tips on how to improve the home’s rating; these assessments are given to prospective buyers and included in the property’s sale details.

The green tax would apply to homes sold with F and G ratings, giving buyers the incentive to bring them up to E or better. It would be part of a government programme to cut greenhouse emissions by 34% from their 1990 levels, by 2020.

But property experts believe any further expense heaped on buyers would damage the market. Steve Thomas of Townends estate agency calls the idea “madness”, pointing out that buyers would have to pay both the tax and “stump up for the upgrades”.

Nicholas Leeming of sales website Zoopla.co.uk says: “Some 65% of UK homes were built before 1965, and in London 27% before the first world war. This would clearly be unworkable.”

Rosemary Rogers of www.reallymoving.com, which arranges energy inspections, says the young and low paid would be hit, as would unusual properties, and the tax would “stop the already fragile recovery in its tracks”.

If the home required double-glazing, window firms estimate at least £8,000 for a mid-sized semi-detached house. One firm, PRP, warns it would be much more for larger homes, or those in poor condition. It recently worked with Cambridge council to retrofit a 1940s three-bedroom house. The process took eight weeks and cost £50,000. The end result was an A rating and the firm says that eventually many of the systems installed on the property may reduce in price if they are used in greater numbers, which would be equivalent to £850 for the average house price.

The two government departments considering the proposal ? Energy and Climate Change, and Communities and Local Government ? say the idea is only one of many measures under consideration.

If the measure does eventually go ahead, wealthy buyers will benefit most. Someone paying £2m for a property with a poor energy rating would pay £10,000 green tax on top of the £80,000 stamp duty. If renovation work improved the rating to E or better, the owner would get a £20,000 rebate.

An even wealthier purchaser investing in a £5m estate would receive a rebate of £50,000. Enough to make the rest of the home-owning population go green … with envy.