One of our clients has been monitoring the performance of his Solar PV system we installed in May 2010 and we are pleased to say that the system is outperforming our estimates by 23%. 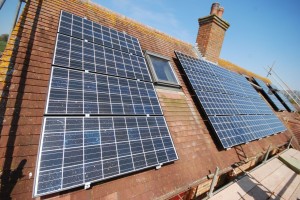 As part of our MCS accreditation we calculate the estimated system performance according to SAP 2009 which assumes the same amount of solar radiation no matter where you are in the country. Basically the assumption is we all enjoy the same amount of sunshine per annum as we would do if we lived in Scotland! Therefore the PV analysis figures we provide are usually always on the conservative side.

There is a website where you can get the estimated amount of solar radiation depending on your location (these are used in the JRC EC kWh estimate column in the table below.)

The table below is the actual performance of a 2.97 kWp system installed in Oxfordshire on an un-shaded South facing roof. Using SAP 2005 calculations we estimated the system would produce 2,541 kW p.a. equating to £1,049 in FiT?s (Feed in Tariffs).

From June 2010 to December 2010 (6 months) the system has produced 1,859 kWh which equates to £767 in FiT?s. This in percentage terms is 23% better performing than the figures we provided using SAP 2005 calculations.  We currently use SAP 2009 for our PV performance figures as this is the accepted standard as of 1st October 2010.

For more information about estimated PV performance and how it’s calculated please don’t hesitate to contact us.